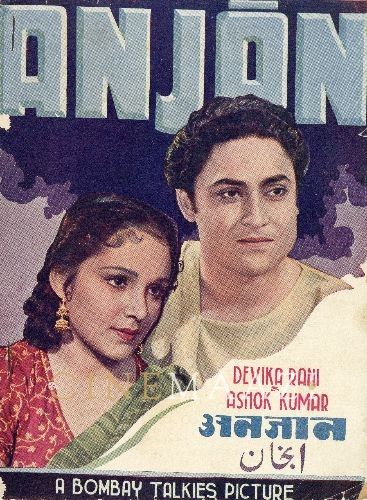 Song booklet cover of Anjan is taken from Cinemaazi archive. This was not part of the original article.

After being away from the screen for a little over two years, Devika Rani returns in Anjan (1941) with a charming vehemence that overwhelms one and all.

Anjan, beautiful and polished, is a personal triumph for Devika Rani without whom even a foot of the picture becomes boring, so completely has this great star stamped it with her individual beauty and charm.

The story is of the usual Bombay Talkies variety-milk and water- though here is a little more milk this time. But the screenplay is so cleverly prepared that barring the first two reels the picture moves quite fast and definitely gains in speed after the interval.

Devika, who plays a poor governess and in doing so lends a glamour to the profession, is employed by Ranima, the widow of a Zamindar, for the care of her two children. The eternal triangle is composed of  a clean, straightforward, young doctor, Ajit, and Ramnath, an evil-looking manager of the estates.

The meeting of the hero and the heroine, Ashok Kumar and Devika, is made quite accidental and incidentally quite interesting. It is a case of love at first sight, though the heroine brushes aside the vision for some time.

And now the triangle starts moving from end to end till the hero becomes sad, the villain becomes more villainous and the heroine becomes ever more charming.

With a very thin material, a lot of transparent suspense has been woven into the story which becomes quite intriguing after the interval. Before the interval the picture is delightful and the time passes under the hypnotic spell of Devika's beauty.

The whole affair reaches a climax in a rather unconvincing court scene in which the hero is acquitted and handed over to the heroine while the villain gets his due punishment.

The picture has plenty of entertainment punctuated with good music all throughout. But the distinguishing feature, after all said and done, is still Devika Rani, the beautiful governess of Anjan.

Ashok Kumar, who looks a little heavy nowadays, gives a good performance as Dr Ajit. V. H. Desai has a dear little role to play and he does it quite affectionately. Girish as Ramnath is affected half the time and camera conscious rest of the time. Master Suresh makes faces as usual. It would be a favour if Bombay talkies stop putting this boy everywhere without rhyme or reason. That kid can’t act and will probably never learn to do so.

Forgetting Devika for a while, the excellent photography attracts attention. Anjan can easily be called the best photographed picture of the Bombay talkies. Cameraman R. D. Mathur, in the very first chance that was given to him, has proved himself to be the best camera artist in the studio. All glory to the studio that creates such superb technicians.

Well, by all means, see Anjan. It is Devika’s own picture and as sweet as she is.

This review was published in Film India on 27th September 1971. The image is a part of our Cinemaazi archive and was not part of the original article.