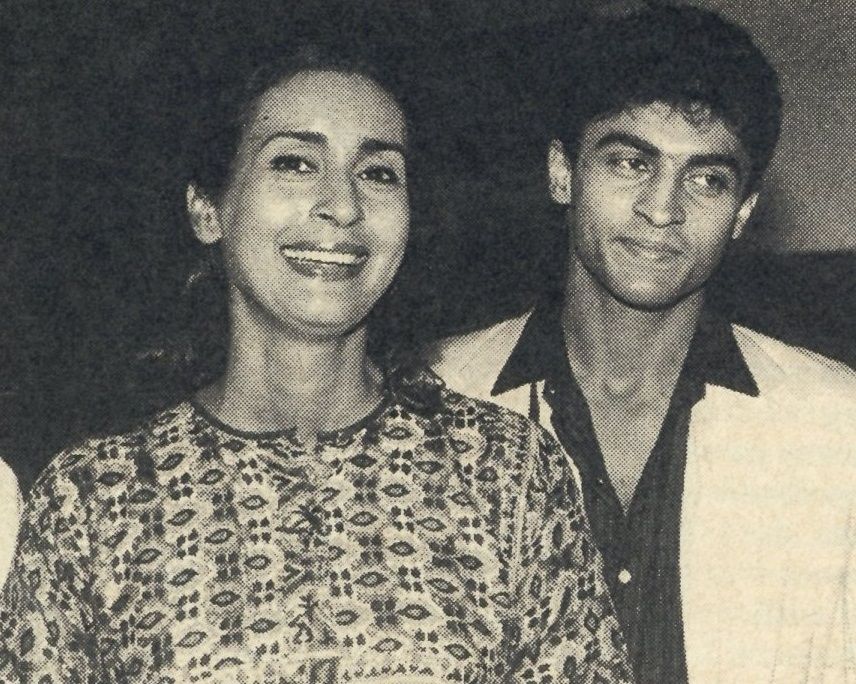 Arun Raje and Smita Patil became friends during the filming of Situm (1982). In this picture: Vikram Makander, Smita Patil and Naseeruddin Shah

Arun Khopkar, the noted documentary filmmaker, was assisting my husband and me for a film. Smita had agreed to do a diploma film for him at the Pune Institute. He said to us, "I have this super girl working in my film," and he brought her over to meet us. We liked her instantly. "She is good," we said. From then we met Smita on and off. Smita and I shared a common birthdate. Over the years, we learnt that we had a lot of other things in common too. Both our fathers were in politics, our native town was Pune, we had very strong-willed mothers and both our surnames was Patil. We both loved children and last but not the least, we both are middle children of our families.

Being Librans, we had the capacity to see both sides of the coin. Of course, there came a time in our lives when we were on two different sides of the coin. There was another woman in my husband's life, and, on the other hand,   Smi was the 'other woman' in somebody else's life. And I felt, `maybe if the other woman in my life was like Smita, life would have been different.' And she felt, 'if the wife was like Aruna, things would have been different.' We possessed different temperaments. While I would be the cool one, Smi had an uncontrollable temper.

After Situm (1982), we were to work together in Rihaee (1988). For me, she was the No.1. As far as talent went she was far above everyone else. Rihaee was specially written for her. She was very keen to turn to direction and said to me, "let me assist you in Rihaee." I vividly remember this conversation at China Garden restaurant. She insisted on assisting me. I argued that the pressure would be too much for her. First to have the baby, then to perform and finally to assist me. But she insisted, "I'll do the role well, don't worry about that. Just see how I do it." "Smi, of course, you'll do it well," I consoled her. But she went on and on like a stuck record, repeating ten to fifteen times, "I will do Rihaee." It was all so strange, so uncanny. As if she had a premonition that she wouldn't be doing it and therefore wanted to reassure herself.

She wasn't happy, in her last days, the last year in particular. She suffered every single day of her life. I was perhaps, one of the very few friends she was allowed to see. In a way, she was cut off from her family too. So, Ma (Smita's mother) would ring me up and inquire about her and I would console her. Sometimes, just from the way, Smi said, "Aruna," in her fine voice, I'd know that she was low and say, "Kaay jhala Smi (what's happened) wait, I'm coming." It would take me at least 45 minutes to reach Bandra from Peddar Road. We'd go out for lunch, shop, converse. I'd talk about the glories of motherhood and she'd recover. For me, the only two highs are life are making a film and having a baby. I believe that motherhood is very special. And I believe that when a woman is pregnant, she should be fussed over and looked after. She must, in fact, be protected and given confidence. Smi on the other hand went through hell! At heart, Smi was a very middle-class woman, with middle-class dreams.... People's approval or disapproval mattered to her, that is, up to a certain point. When she and Raj went to see my parents, my mother gave her a sari and a gift for Raj. Smi was thrilled. "Your mother has accepted us. I am so happy." In the seventh month, my mother said she would hold the ceremony for Smi. Since Ma knew nothing about these rituals, her mother and mine got together and organised the ceremony for Smi. She was so happy. All these things were important for her and made her very happy. And yet there was so much unhappiness.


She had gone abroad and had written to me, "Life is a lonely path, which both of us are walking along. Hang on. We're both there together!" Her last two years went with both of us comforting each other. I still can't forget that last day when Smi said to me, "Don't walk out just like that," referring to my husband's home. She took my hands in hers and said, "Promise me, you won't give up." I can still feel her touch.

Sadness, I think, was the bond on which our relationship was based. My daughter was suffering from cancer and was in her last days. Smi was very attached to Gagi. They did nonsensical things together. Gagi was bedridden, so Smi would snuggle up to her, and do crazy things. Both of them had the same toothy smiles. Hell came to me with my daughter's death. I was stone calm. "I don't know how you can keep calm," she said. Then, my marriage broke up, again Smi was around like a rock of Gibraltar. Soon, she started going through hell herself. Now, she was the one who needed comfort. Smi became a Gagi to me. As it is, her isolation from her family, was tearing her apart. When Smi died, Ma said to me, "you have lost your Gagi again." I went into a depression all over again. But then one has to come to terms with life... One image always comes back to mind. Gagi and Smi looking at me — both giggling together with their very toothy grins.

People whose numerological number is 8 are very tragic people. Inexplicable things happen to them. They achieve success, but somehow pay a tremendous price for it. Smi and I both suffered from the 'lame puppy dog' syndrome. I brought into my home a friend who was going through a broken marriage. I gave her emotional support. She became so confident that she stabbed me, by stealing my husband. When Smi met Raj, he gave her a lonely, sob story of being an unhappy man. Her heart went out to him. She thought she could fill in all the gaps of his life...The difference between us however, was that she was very possessive, I'm not. After the loss of my daughter, I have become very detached of any possession. This, Smi could not conquer. She was very possessive and suffered tremendously because of this.

This article was written by Aruna Raje was originally published in December 1991's supplementary issue of Junior G magazine titled Smita Patil's Memoir. The images used are taken from the original article and the internet.
742 views