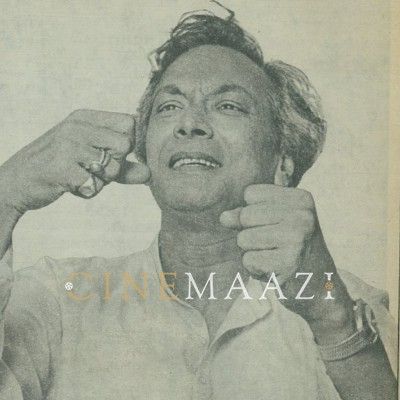 Whatever happened to Naushad? In the wake of the musical chaos achieved by aping cheap verities of canned music imported from the West, a spate of criticism has been constantly aimed against Naushad - mainly that he is deplorably out of style.
The maestro is said to be sadly outdated and outsmarted. The future belongs to the makers of the titillating noises which meet the demands of the new generation.

There is another group of critics, and admires of Naushad too, who detect in recent film flops the waning years of the maestro. The much-publicised Leader (1964) was a dismal failure; down the drain went Saaz Aur Awaaz (1966). Even the skilled camera work of Dwarka Divecha could not redeem Dil Diya Dard Liya (1966), and inarticulate film laced together with tall stories of a pauper-turned-prince and pathos thrown in for good measure. And the association of Naushad's name with these flops seems to these well-wishers a sad sign of the hardening of his musical arteries.

They are waiting to intone a requiem for a maestro.

A closer analysis of these films, however, will reveal not the musical eclipse of the maestro, but the telltale signs of new age in film patronage. A discerning public is slowly emerging that wants none of the time-worn cliches and is equipped to judge films intelligently. They refuse to be ballyhooed into accepting worthless films just because they sport marquee names, seven-figure production costs and Eastman color. Films moghuls who want to hitch their wagon to stars and ride the crest of popularity on the coat-tails of famed music-directors, find audiences shying away from their mammoth productions. There was a time when melody was king. But now music is not everything in a film. The 'failure' of Naushad's music in recent years was therefore due to its being tuned to dramatically faulty themes which defied logic and reality.

Naushad composed Mother India's (1957) song Duniya mein ayye hain to in the Pilu raag. The song was voiced by Lata Mangeshkar and Usha Mangeshkar.
The man whose music is now on trial is as enigmatic as his music is unique. His tunes are a rare blend of folk music verve and classical purity. The texture and tone of Insaan bano (Todi), Insaaf ka mandir hai yeh (Bhairavi), Duniyamen ham aaye hain to (Piloo), Ek Shahanshah ne (Lalat), all bear out the fact that Naushad's music can be refreshingly fresh although rooted in the Indian musical tradition, and abiding.

It was a Herculean task to shear the timeless classical 'sangeet' of its complexities and to adapt it as 'Janata' music. Orchestral effects, harmony and rhythm coupled with the technical wonders of sound recording have been adding new dimensions to classical music. Thanks to film music, raags like Darbari Kaanada, Bahaar, Megh, Kalavati, etc. which once pervaded the glittering courts of nawabs and maharajas have now become the proud possession of the masses. Orthodox ustads still revolt at the mention of orchestration and harmony. But this 'hybrid' idea, launched by New Theatres of Calcutta, and later boldly supported by A.I.R. in occasional programmes, caught on and has evolved into a sort of national music.

"My aim is to modernise our old music and add colour and freshness to it," Naushad says. But in his endeavour to spin out new melodies, this melody-maker has never wandered off the limits of our musical traditions. Unlike some Hindi songsmiths, who would not hesitate to insert a jarring note to lend novelty to a musical structure, Naushad would never think of pandering to pop music lovers and buying popularity at the cost of aesthetic beauty. No wonder this uncompromising maestro, who is almost a tyrant where purity of melody is concerned, is sadly out of tune with a restless generation that wants to live to frenzied cacophony.
While catering to the situational demand, Naushad always adorns his pieces with such aesthetic value that they are good to listen to at any time. The concluding bars of O Diniya ka rakshwala  (Baiju Bawra, 1952), the climatic upsurge of melody in the second stanza of Meri Kahaani (Deedar, 1951), the choral effects in O dur ke musaafir (Uran Khatola, 1955), the breezy humming of More saiyaaji (idem), the pure melodic structure and super-structure of interludes in Ay shahar-e-Lakhnau (Palki, 1967) are but a few examples of Naushad's musical virtuosity.

"Mine is not an isolated venture to crusade for Indian music," said Naushad recently. "I am sure the music-loving Indian public is behind me, and my humble efforts would be amply rewarded if we are made aware of the excellence of our musical heritage." He thinks that he has done nothing except hold a small candle for others. And what should others do? "Carry on the good work," he said with a smile.
Above all else, Naushad's music sings of the eternal freshness and chase wonder of love. A fine Urdu poet in his own right, Naushad religiously strives to make lyrics vehicles of fragmented love and it is with a dignified eloquence and chaste reverence that he permeates them with musical beauty. His roots are struck deep in the reverent tradition of his masters like Laddan Sahab, Yusuf Ali Khan and Jhandey Khan - men who made a religious rite of music composition.

Old masters never die, they fade away. Changing times and passing trends may blur the image of the musical genius of Naushad. Yet he will continue to be some maestro film fans have come to admire. The connoisseurs, the lovers of music, want him to be the same Naushad, even if an era in Indian film music is coming to an end - the Era of Naushad.

This article was originally published in Star & Style magazine's 15 June 1967 issue. The images used in the article are taken from Cinemaazi archive and were not part of the original article.
661 views