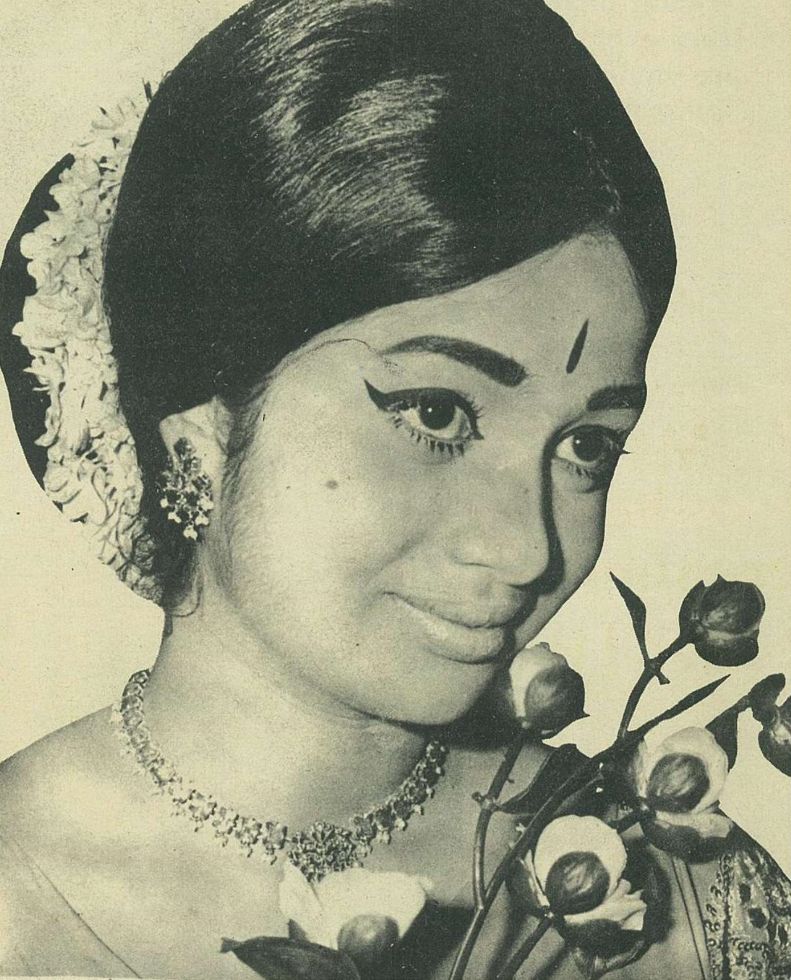 Despite the fact that many of the old-time stars continue to hold sway in the film industry in the South, quite a number of young stars have achieved popularity in the past few years and one such newcomer is Kumari Padmini (not Baby Padmini), a multi-lingual star of the South.

Vivacious Kumari Padmini is a very attractive girl. The lovely smooth and fair skin of her face, her almond eyes, pearly teeth, long, jet black hair and svelte figure make her obvious star material and she has lots of acting talent too.

TALK OF THE TOWN

Padmini has been the talk of the town since the last few months, particularly after the release of the two Tamil films Tirumalai Thenkumari (1970) and Kankakshi (1971) in which she played the lead roles. Both these movies were produced and directed by A. P. Nagarajan, a notable figure in the Tamil film industry. Padmini proved her mettle convincingly in bah the films and now many producers have signed her up for their productions and today she is quite a busy star. It is only p months since Padmini entered the movie industry. Her debut was made in the Malayalam film Unniyar Cha (1961), in which she played a brief but powerful role very convincingly. Padmini hails from Kerala and her mother tongue is Malayalam.

She is very frank about her motives in entering the film industry. She makes no pretentious claim to artistic commitment and creative fulfillment. She admits that she entered the industry because she had the assets to achieve in a film career both fame and affluence, and this has been proved correct. This, however, does not mean that she is unconcerned about the quality of her performance. She is one of the most meticulous stars in the industry and gives of her best to every role she plays irrespective of whether she thinks it a good role or not. That is why she has been able to attract producers in such large numbers and to establish herself firmly in the front rank of artistes so early in her career.

Currently, Padmini is starring in at least ten films in three southern languages-Tamil, Telugu and Malayalam. One of them is a film being produced and directed by veteran Bhanumathi who is also playing the main role in it.

Asked about her preference in roles, Padmini was engagingly modest. "I have not yet reached the stage of picking and choosing. The producers do it for me and I play the roles given to me and as directed by the director, I only try to understand the role and follow the director's instructions with sincerity so that the role looks convincing.

"Padmini's acting calibre may, be judged from the fact that she has already graduated to Hindi films- an all consuming ambition of almost every artiste of the South. She has been selected for an important role in Venus Pictures' Rakhwala (1971) being directed by A. Subba Rao.

To act in a variety of languages is not an easy job. One has to adapt oneself to the complex nuances of these languages. Not only that. The kind of acting popular on the Tamil screen may seem ludicrous to Hindi audiences and vice versa.

"I know Telugu, Tamil and Hindi very well and can speak fluently in all these. And of course Malayalam is my mother tongue," Padmini says. She is therefore perfectly at home when acting in a film in any of these languages.

What career would she have preferred if she had not joined films?

"I can only tell one thing with certainty. I would not have chosen early marriage. I have always wanted to make something of my life before settling down to domestic self-effacement.

I might have taken up social work. I would have been a social worker if I had not joined films," she replied. What are her plans for the future?

"I have no special plans as such. I am happy today and I hope to continue this way. There is time enough to worry and plan. Today I only want to concentrate on my acting and achieve distinction in the field I have chosen."

In private life, Padmini is a very well-mannered, but nevertheless gay and ebullient person. She leads a happy life, popular among her colleagues and friends, welcome everywhere she goes. Her conversation sparkles with wit and it- is not barbed. It does not hurt anyone. And she is an excellent veena player. She spends at least one hour every day practising that difficult but sweet instrument.

This article was originally published in Star & Style's 25 June 1971 issue. The image used is taken from the original article