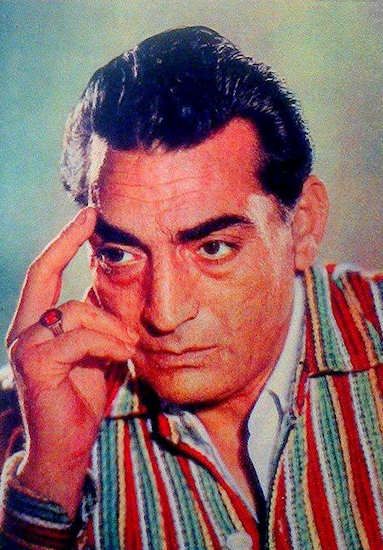 This image has been taken from the original article

I took up acting as a hobby, way back in 1929 when Mr. Kardar first asked me to play the role of a Pathan in Safdar Jung  (1930), a silent picture he was producing in Lahore.

“Can you ride?” I was asked

They thought at first I was bluffing: very soon they found out I wasn’t and on the strength of these two very “necessary” qualifications, I became an actor of the silent era.

From the beginning, I had a thirst for authenticity, so much so that in my next picture (Wandering Dancer), in which I was playing the role of a one-eyed bald-headed man, I shaved my head! Since then, in every picture which required me to play a bald man I have been regularly shaving my head to play the part.

Then in 1932, I got an interesting role in my first talkie Sacred Ganges (Pavitra Ganga, 1932). In this picture, I played the role of a mad monk. In the thirties when an actor gave a fine performance, audience appreciation used to be so frenzied that generally, the theatre manager had to present the star to the audience to calm them. This happened to me after the release of my picture Deen Aur Duniya (1936) in Lahore. My performance as General Mohammad Tariq was highly appreciated and the Prince of Sarawat publicly honoured me for my interpretation of the role.

A greater challenge came my way soon after when I was cast opposite Kanan Devi as the hero of Faisla  (1947). The role was difficult. That of a wealthy young man, basically good who leads a sort of double life. He is engaged to a nice girl and, repentant, returns to his fiancée. While I was playing this role I was able to form a certain concept of villainy which served me well later when I began to play the villain in most of my pictures.

I generally base my interpretations on the assumption that villains are not completely bad. They become what they are due to circumstances or to a complete lack of affection in their upbringing. That is why the story remains quite credible when such a man sincerely repents for what he has done – otherwise his conversion would seem very unrealistic.

I was in Calcutta with New Theatres and here, under the able guidance of the late Mr. Hem Chandra, I at last felt that I had become a real actor.

In 1939, I played two of my most memorable roles. The first was in a picture called Mera Punjab (1940) an adaptation from that famous novel “The Good Earth”. In it I played at various stages, the young man, the father and the grandfather. It was an interesting experience.

Later, I played the hero in a film about the First World War, called Sipahi. (1941) It is the story of a soldier who fights for his country and the under the economic depression that follows is unable to find a job. On the verge of starvation, he becomes a gangster and at the end is shot in an encounter with his pursuers. The last sequence, in which the soldier-turned-gangster is cornered by six or seven men and is shot was the most moving scene I have ever played.

Then, under the direction of Mr Hemchandra  I acted the villain of the family in a story about three brothers entitled Teen Bhai (1955). It was a memorable experience not only because it was inspiring to work under Mr. Hem Chandra, but also because I was able to act with artistes such as Pahari Sanyal, Nazir Hussain and Bharat Bhushan.

In 1949, my eventful association with New Theatres ended and I came to Bombay. My first film here was Badal (1942) which became quite popular. The film was directed by the late Amiya Chakravarty and I played a villainous sardar whose greed for money is his undoing. Then followed the role of a dacoit in K. Amarnath’s Mehbooba (1952) and after that for some time I drifted along, not getting any good roles until Mr S.P. Irani signed me up for a very interesting role of one of the Dadas or the criminal lords of the jail who each had a certain area and loyal followers over which he ruled. This picture gave my career a new life and some good roles followed.

In Chandrakanta (1956) I played a mad conqueror who wanted his people to worship him as a living God. Before I began rehearsing for my part I tried to study the lives of other such characters like Nero and some of the Egyptian Pharaohs. In Kishore Sahu’s Sapna (1952) I played an outlaw who kidnaps the heroine played by Bina Rai. In one scene in which I was supposed to manhandle her, Bina Rai actually slapped me hard on the face. I was astounded! Later when I asked her why she had done it she said, “It was your eyes: I couldn’t bear that hateful look you had on your face!” What better compliment could I have got from a fellow artiste?

I recently played an interesting role in Leader (1964) – that of a fanatic killer who is out to exterminate a famous man.

I am still not satisfied with my work; I would like to do better. I am a great admirer of John Barrymore and Paul Muni – I have learnt from them but I do not try to retrace their footsteps. In doing so you tend to lose your identity. So I follow my own path trying to achieve an individuality on the screen, basing a role on my own interpretation.

Cinemaazi thanks Sudarshan Talwar and Cineplot for contributing this interview which was conducted in 1960s.