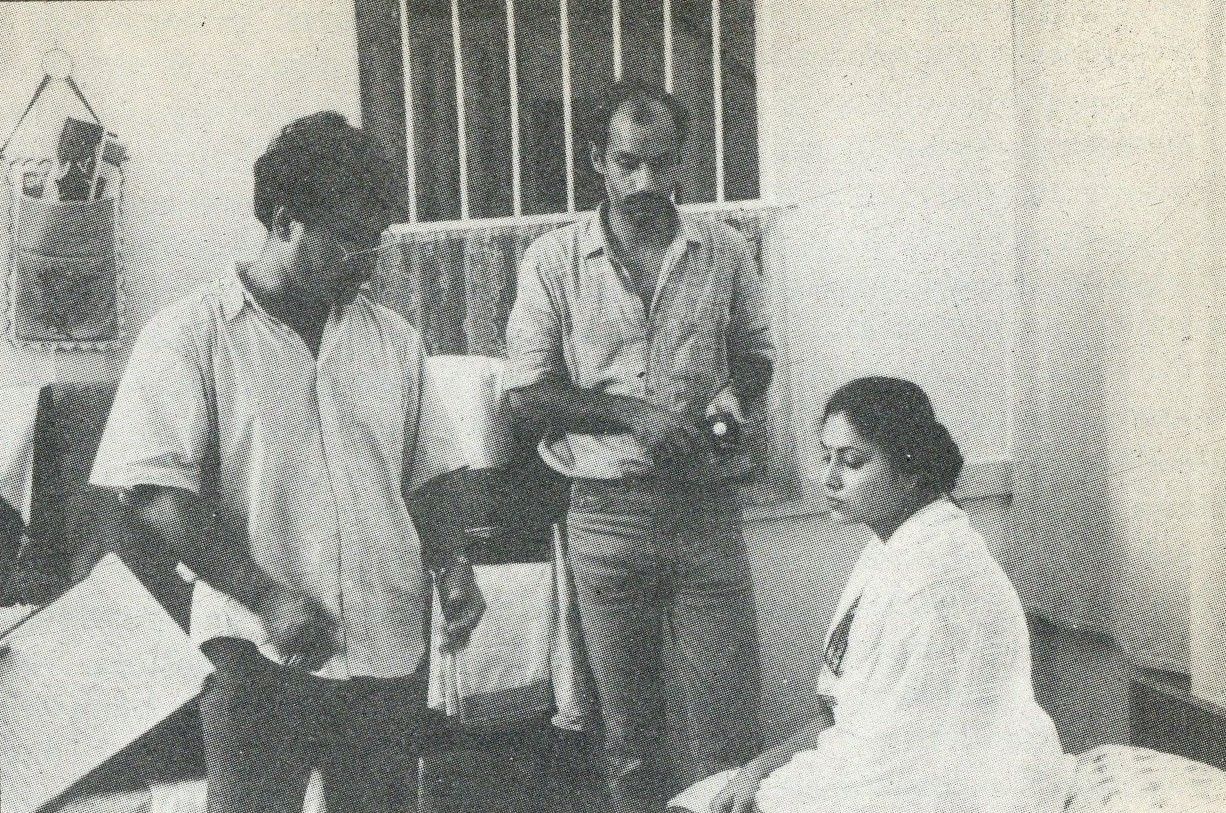 Cinema in the small states of Assam, Orissa, Bihar and Manipur has always been faced with crucial financial problems, film infrastructure and poor distribution system. It is the cinema of social relevance that has made many serious filmmakers of these regions brooding and committed, following the courageous examples set by Calcutta’s Satyajit Ray, Ritwik Ghatak and Mrinal Sen. Assam’s most renowned filmmakers Dr. Bhaben Saikia said: “We deem it a privilege to emulate these mentor directors; for it is their films that show us the light in the right direction and teach us to apply the medium of cinema to help consciousness grow on social reality”.

It goes without saying after Padum Barua’s trend setter film Ganga Chilanir Phakhi made in seventies, it is the celebrated professor of physics Dr. Bhaben Saikia could really make a dent in Assamese cinema by his first award winning film Sandya Raag. All his films Anirban, Agnisnan and Kolahal (all won national awards for their excellence in direction, script and story) are a synthetic study of man/woman relations and their eternal struggle to transcend insular world of ideas marked by smallness, greed and social exploitation. Bhaben Saikia’s last film Kolahal is an indictment on the corruptive state of reality where mind/soul is claimed to be a commodity for sale. Bhaben Saikia challenges it. The guardian critic Derek Malcolm has remarked: “Saikia’s film has both a touching sympathy for the woman’s plight and a cinematic skill that is subtler than it might appear”. Assamese cinema is also immensely enriched by Jahnu Barua whose Aparoopa (1979), Papori (1985), Halodhia Chorayi Baodhan Khai (The Catastrophe) (1987) and Banani (1989) have, quite on an appreciative level, helped groom a certain kind of viewers, if not a special audience. Jahnu’s Halodhiya…. won for him the coveted President’s Gold Medal that no previous filmmaker from Assam has claimed. His latest Banani is a motivational film on the ecological balance of nature which is ballasted by the high rate of forest preservation. By employing a warm human element into its texture Jahnu has made it an experience of collective life, bound by affection, sympathy and love.

Besides, there are a few filmmakers in Assam, all of them very young energetic and a little innovative too, who at regular intervals are making one or two films that merit our attention. For example Charu Kamal Hazarika, Mridul Gupta, Hemanta Das and now Gautam Bora,-they all have made it a sure point to use cinema as a means of creative expression without an eye for box-office bonanza. Charukamal Hazarika’s two films Alokar Ahban and Baan both made with the finance from the Films Division of Eastern Regional Production Centre, are a serious essay of our times involving man, machination and money. Morality is made a primary question. The films have won national awards in two successive years. Mridul Gupta’s Sutrapat tries a typical dilemma of a filmmaker who finds no backer or a sponsor to show his film that concerns his own people. Hementa Das’s Thatapio Nadi speaks of a class obviously down-trodden, engaged for survival in a rough competition. It is, however, Gautam Bora’s only Karbi language film Wosobipo (Call or the spring) that shows real Flaherty touch in treating people at the grass-root level with empathic insight. The film has won Gautam a national award (director’s first best film) and is financed by the land reforms wing of the Karbi Anglong Autonomous District Council.

Pictures in Oriya film experiment too does not hold out promise that one can be proud of . Orissa’s off-beat cinema is mainly being carried on by Calcutta’s Biplab Roy Choudhry, Nirad Mahapatra, Manmohan Mahapatra, Sadhu Meher and a woman director Parbati Ghosh. It was, however, Mrinal Sen who showed to the Oriyan filmmakers by his Oriyan film Matria Manosha made two decades ago. Cue was taken by Biplab who shone with his Chilka Teeray followed by Nirad and Manmohan Patra’s films. Besides what the mercenary filmmakers do with the general lay viewers, with no cause to support, it is mostly Manmohan Mahaptra who has been constantly been making films that smack of our social milieu. His films truly represent original flavor of Oriya culture and life, unmixed by coloured infatuation of untruth. Sita Raati, Klanta Aparanha, Trisandhya, Majhi Pahacha, Kuhudi, Andha Diganta and now Agni Vina reflect a plexu of variety of social subjects which Manmohan Mahapatra has tackled with flexible approach of rational mind. For him victory of man over man-made barrier is more important. He is prepared to use cinema as a “microscope” so long it helps all to see the unseen, unknown, afflicting our civilization. Nirad Mahapatra also gave the national film scene a jolt by his highly sensitive film Maya Miriga. A tale of family disintegration, pressed under economic iceberg, this film is a revelation. It won the best national award as the best second feature film. A mention must be made of Prabati Ghosh, the creative woman filmmaker from Orissa, who won national recognition for her films Kaa and Stree in a seventies. Her most talked about film is Chha Mana Atha Guntha which, like Prem Chand’s story, unfolds the rigmarole of a peasant who loses his land to a land lord. With her Sadhu Meher and Sabyasachi Mahapatra too have contributed to the promotion of good Oriya cinema in Orissa. Sadhu’s Abhilasa, Babula and Sabyasachi’s Sambalpuri film Bhookha, made in the neo realist tradition, hold hope for better cinema to survive. It is no doubt the still to-day infatuation for ‘masala type film’ impels vast audience with abysmal ignorance about good cinema to get glued to flush of unreal film junk which literally hamstrings innocent, common viewers to low taste. To subvert this trend, an incessant battle is on there like in any other place in the world.

In Manipur it is again one-man show that helps the good Manipuri film scene pulsate. Aribam Syam Sharma is, of course, the name that counts heavily if one talks about Manipuri cinema. Now the chairman of the Manipur film Development  Corporation, Aribam Syam Sharma is to tackle a lot financial problems facing the few off-beat filmmakers operating in Manipur. He rose to international prominence with his Imagi Nigthem (My Son, my Precious) in the early eighties. Since then he has made Paokhum Amma, Sangai, Koro Kosi and now Ishanou. His Sangai has been made at the cost of Rs. 5 lakhs at the Kalinga studio in Orissa. His new film Ishanou, shows the filmmaker revealing the “mystery” in the Meibi culture and class. Ishanou seems to suggest life winning over the bizarre as we find in the little girl who braves the forlorn life with a sense of human warmth and purpose. Aribam is also supported by another young filmmaker M.A. Singh only a couple of years ago took the national film juries by surprise by his maiden film Sanakeithal (Golden Market). The film is said to be a strong attack on a system of class dominated society which crushes the “persecuted” to the dust. Singh’s new film and first in colour Chakra Paikra Bada however has failed to evoke interest from the critics as well as the national juries. Singh thinks many have not got the drift of the film aimed to convey. And Aribam only the other day said: “We are really plagued by shortage of finance which is a must for building up a good cinema movement. Until we have a breakthrough we are destined to crawl on”.

And one of the biggest states in the east is Bihar. Here anything but cinema is encouraged. Govt. is worst culprit for damaging good cinema, so is the opinion of many filmmakers of the eastern region. In Bihar it is Girish Ranjan who after Kaal Hamara Hai has made the longest documentary on Bihar’s history, culture and politics. The documentary is Bihar Itihasko Pannome. But it is doubtful how Girish Ranjan can retrieve his money as he told this critic: “if govt. does not buy it, nobody will see it”.

The article was originally published in Indian Cinema 1990 issue. The images used in the feature have been taken from the original article and the internet.
528 views