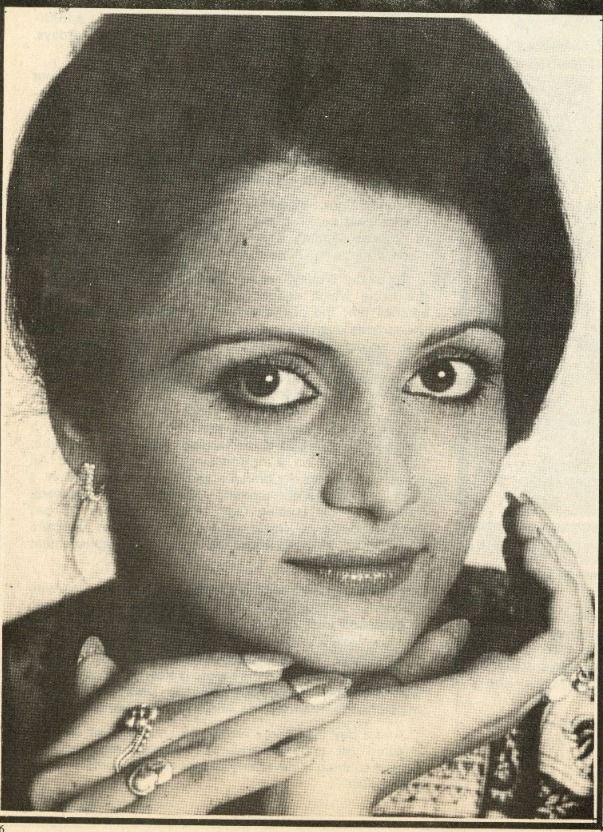 Payal's image from the original article

That's Payyal speaking. These are her lines from B.R. Films' blockbuster  'Burning Train' , in which she is getting a big break opposite Vinod Mehra, who plays her "husband". Payyal is on her way home travelling with her mother on the Delhi-Bombay train for her first delivery. It so happens that she gets her labour pains while she is on the train. Navin Nischol, the doctor on the train, comes to her aid. Suddenly, the train catches fire. Payyal doesn't like to give birth to a child whose death she'll have to witness.

After "delivering" her lines, Payyal came smiling towards me and said. "It is quite interesting to work under director Ravi Chopra. Since I'm a new-comer he teaches me all the technicalities besides guiding me as to how I should conduct myself in this field. I've an excellent rapport with Raviji and Uncle (B.R. Chopra). Whenever Uncle is around, I'm in tension and awe-struck."

"I got my first break in Punjabi film called Dakra (Takraa), produced by a family friend Sukhdev Ahluwalia. That fetched me an award for acting. It was with this success in hand that I approached B.R. Chora, who also knew my papa. In Dakra, I played the role of a village girl who sacrifices her life for smuggler she loves. It was almost like the role which Parveen Babi essayed in Deewaar.


"What drove you to acting?" I probed.

"Drove?" Payyal indignantly asked and proceeded, "I wasn't driven to acting. I've always loved acting. At school, I was quite good on the amateur stage. I was able to get through my exams only because of my ability in fine arts. I have a real aptitude for acting. Soon after my first role in Dakra, I realised that my life and career lay in films."

Tall, lissome and attractive, Payyal is a Punjabi, hailing from Delhi. At one time, her father was working with producer-director H.S. Rawail. Film acting, I admit, has its hazards but I am sure of overcoming the pitfalls without much difficulty. So far I haven't had to compromise on moral values to get started on my career. I am sure of safeguarding my integrity in the future as well. The people I'm now in contract with are genuine dedicated film-makers and they shall not take unfair advantage of me," Payyal declares.

A firm believer in God and destiny, Payyal continuing, says, "Whatever will happen will always happen. Let tomorrow take care of itself. That's my philosophy. It has not been easy, of course, to convince people that I am good at acting. I've had to pave the way for it all on my own. I've had my share of rebuffs. But that's part of the game. I enjoy fighting against odds."

Here's wishing her all the pluck she needs.

This is a reproduced interview from Film World's March 1979 issue.
The poster used in the article is from Cinemaazi archive and was not part of the original article.