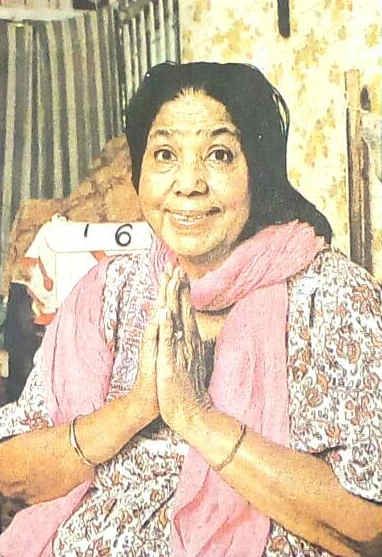 Uma Devi comes to the film industry almost four decades ago, as a playback singer. Yet, you could not classify her under a playback singer so easily either. For here was a staunchly determined youngster, straight from the village who insisted upon singing for one music director only – Naushad. And it as Naushad who coaxed her acting abilities as well. With a dream break in Babul (1950) and an opening sequence with Dilip Kumar, Uma Devi was transformed into Tun Tun. And she had filmgoers in splits ever since.

It is often said that those who make others laugh have a lot of hidden pain and agony within them. Perhaps this rings true for the life of Uma Devi as well. Even as the hurt is successfully camouflaged, it seeps through undetected, through the endearing sincerity if nothing else. “People tell me I should celebrate my golden jubilee in films. But let me tell you, my fans still recognize me and enjoy my voice and comedy. That is my greatest reward, that is my jubilee”.

Today, with the decreasing number of film assignments and age catching up, Tun Tun prefers to concentrate on stage shows instead. “I have been all over the world, from Canada to England and Nairobi to Dubai and so on. Believe me, more than my comedy, people ask me to sing, Afsana likh rahi hoon…

“When I came to Bombay, I did not know a soul. There was no television or tape recorder in those days and I picked up my love for music by listening to the radio. I have not been to school nor have I had any training in music. Wherever I would go, I had just one query to ask, are you Naushad. For I wanted to sing for him and only him. I even walked out of a recording once when I realized that the person I was recording for was not my idol. Call it crazy but at that time I was obsessed. Films were considered a taboo especially for girls and I naturally had a tough time. But God came to my help and if I have to thank anyone after God, it is Naushad.

“Afsana likh rahi hoon…” soon became a rage and my name became known. Despite many attempts to change my view, I remained adamant to stand in Naushad’s shadow and continue signing only for him.”

“Naushad always told me that I must also act. He was convinced I would be a good actress by the expression he would note on my face whilst rendition. In the meantime, I got married. One day, S.S. Vasan who was remaking a Tamil hit of his, Chandralekha (1948), in Hindi, approached me to sing for his film. They said my voice matched their heroine’s the most, and I was given this offer superseding top singers like Shamshad Begum and Zohrabai.

I was not at home and my husband agreed. Thus for the first time, I sang under another music director, Rajeshwara Rao. The film was a big success but the mistake I had committed in the bargain cost me dearly. For I was to sing for Kardar’s film under Naushad and since I was away in Madras, my contract was cancelled.

Those music directors whom I had refused now took their revenge and refused to sign me as well, spreading rumours that I had not been taken for Naushad film because I was losing that quality in my voice! What could I do?

With little assignments and the money dwindling, we faced a tough time. It was Naushad again who came to my rescue. He said I must start acting. I asked him to give me a break only on one condition, that it would be opposite Dilip Kumar! It left him quite dazed. I told him if I was to begin a career anew, it must make a reasonable impact to be noticed and what would be better than a role opposite Dilipsaab? He agreed to my logic and a role was specially written for me in his first film, Babul.

It was Naushad and Dilip Kumar who thought of this new name for me as they said, Tun Tun sounded musical enough to go with my profession. I played the hefty young daughter of the postman who wants Dilip Kumar to marry me and brings him home much against his wishes one day.

Our encounter is hilarious. Stunned as he is at the sight of the ‘nazuk kali’ my father had described to him, I ask him, ‘Panja ladaoge?’ In one scene I had to hit him and he had to fall. It was not coming across well and Dilipsaab asked me to be more natural and hit harder. I hit him harder and for the next three days, he could not move his neck and had to wear his collar. We could not shoot for some days and when we resumed, the first thing he asked me was to please not be so natural!

Another memory she fondly recalls is that of her rakhi brother, Guru Dutt. “Guru Dutt was a gem of a person. I would go to him with any problem and he was there to help. I did not rely upon anybody as much as I did on him. I borrowed two thousand rupees to pay to the landlord of my present house from him. I remember he had given me a thousand rupee cheque and I insisted he give either 2000 or I will not take anything. He laughed and signed me the check. I returned it to him after some time.

Whether you remember her songs from Dard (1947) or Anokhi Ada (1948) and so many more, or you recall her uproarious comedy in umpteen appearances from Kohinoor (1960), Rajkumar (1964), Professor (1962), to Udan Khatola (1955) and the more recent ones, she remains a well-liked and popular name to this day. And whether the industry and the world gave her due or not, she retains her loving and sincerely generous nature as well.

Cinemaazi thanks Sudarshan Talwar and Cineplot for contributing this interview.