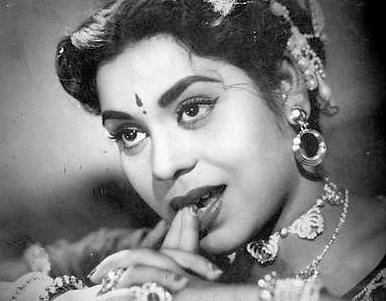 Kumkum's image from the original article

In an industry ruled by top stars, the lot of younger artistes, who have to fight their way up in the all-competitive world of make-believe, is pretty hard indeed. One such up-and-coming artiste, who has just graduated from dancing to lead roles, is Kum Kum, a deserving candidate for encouragement by critics and connoisseurs of film art. Talented, vivacious and preserving, Kum Kum has been in films for the last five years.

“After five years of hard work,” Kum Kum told me while I was dining with her the other night in her cosy little flat at Bandra. “I think I have just put my foot on the bottom rung of the ladder. I have still a long way to go and I know there are many pitfalls before I can reach the top. I am just a beginner. I have to be always on the alert. The competition and thrill of uncertainty in the profession make me work hard and that keeps me happy. I have faith in my sincerity and I live on hope.”

It was her inherent love for the screen that made her first a screen danseuse and now an actress. Born of a middle-class Muslim family in Banaras, Kum Kum, who was originally christened Zebunnisa, yearned to join the movies even as a girl of 10. “My mother told me,” she said with a reminiscent far away look in her eyes, “that I was an ordinary plain girl with no talent and so should never hope to become a movie actress. But I never accepted her view as final. The greater she discouraged me, the higher became my ambition for winning plaudits on the screen. Supported by my elder sister Radhika, who is also an actress by her own right, I persuaded my mother to arrange for my training in the terpsichorean art.”

Kum Kum learnt the Kathak school of dancing under Shambhu Maharaj in Lucknow and migrated with her family to Bombay in 1952. Here, her aunt, actress Nirmala, came to her rescue. She put in a word about her niece to producer-director Shaheed Lateef. That was how Kum Kum got her first break in the latter’s film Sheesha. She had just a tiny dancing role in it. She was then fourteen and the year was 1952. Though she appeared on the screen only for a few minutes, she created a good impression on the minds of those who saw her. There was a refreshing note in her dancing and that appealed to the producers, who went to her with new contracts.

I finally asked her what experience had taught her all these years. “Experience,” she answered without a moment’s hesitation, “has taught me to be humble and to respect and regard everyone. I have learnt one basic fact and that is that everything in this world, even the tiny ant or an earthworm, has a special job to perform. I have also learnt not to insult anyone but to love everyone. This is the surest way to win friends and success.”

A great lover of nature, Kum Kum is more of a home bird, her leisure hours being spent mostly in domestic chores. Marriage is not in her mind. “I have no time for romance and marriage. My work is keeping me busy and satisfied and I am contented with it,” she said in conclusion.

Cinemaazi thanks Sudarshan Talwar for contributing this article which was conducted by T.M. Ramachandran in 1957
589 views