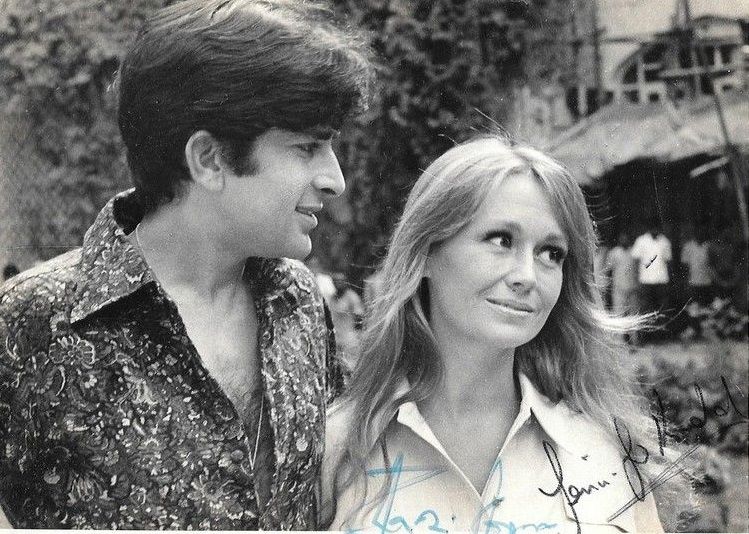 Slowly word began getting around that I was struggling, looking for work. This surprised many, for by then Raj Kapoor had established himself and even Shammi Kapoor was a big star. The only one unsuccessful in the family was me. In their own way, both my brothers tried to push my career. Shammi Kapoor would send me producers he could not accommodate himself. They offered me good roles and rather good money, but I said "no" to their offers. At that time I had these ideals of good cinema, and good performances. I didn't want to play roles where I'd be required to sing and dance around trees. "I am an actor, not a juggler," I told the producers. They thought I had gone mad. I have to seriously analyse where these ideas stemmed from. Was it an influence of the Shakespearana?' The foreign films I saw and read about? Or was it a silent rebellion, to prove myself different from my two brothers, both accomplished dancers in their own right? I honestly don't know but to every producer who came to my door, I said, "no... no... no... no..." Soon people began discussing me with a line I got quite used to listening — "aare uska to dimaag kharab ho gaya hai."

Due credit must be given to my family, at this point for not once trying to influence me. Neither my esteemed brothers, nor my father and certainly not my wife. It was my cross and I had to bear it. It was my problem and I had to find solutions. And I did. The first film I signed was Ek Anaar Sau Beemar. My first film to be released however was, Char Diwari (1961) and the first film I began shooting for was, Yeh Dil Kisko Doon (1963).

I can never forget that morning. The mahurat was at Central Studios with my heroine, Ragini. I woke up very early with butterflies in my stomach. At breakfast, Jennifer presented me with a small gift, a tradition she maintained until Utsav (1984). For Junoon (1978) 36 Chowringhee Lane (1981), Vijeta (1982) and Kalyug (1980), she gave me token gifts relevant to the film, or the role I was playing. I missed this during Ajooba (1991), but her kids compensating for her absence, carried on the tradition their mother had started... Memories, I tell you, have a way of spreading their roots. You scrap a little, and you don't know where to begin.

Our first house was in Olympus Apartment, Napean Sea Road. In the beginning, the building owner was reluctant to give me the flat. He didn't want to sell the flat to a film star. "Dhamal karte hai," he told my producer, Bhauji. When my producer convinced him that I was of the sober kind, he seemed inclined, but again there was another hitch. I didn't have the entire sum. Eventually, Bhauji, to sort out matters, bought the flat in his name and gradually I settled accounts with him.

Like the first car, I got sentimental about this flat too. It was a very pretty apartment, economically done up but aesthetic. Handloom curtains, chattais, plants, handwoven bedspreads, potteries. Whenever Handloom House or Khadi Bhandar had a sale, Jennifer came back with heaps of materials.

It was a happy phase. I had my work. I had a home. And I had a son. But the family wasn't still complete. Nor was stardom. I had work, yes, but I had no standing as a star. In the film industry, where an actor is known only by his last hit, my last five films were all flops. I had money that allowed me to live comfortably , but not enough to fulfil big dreams. In the trade, I was commonly referred to as a 'flop hero.'

Dharmaputra (1961), Mohabbat Isko Kahte Hain (1965) were both flops and distributors begged producers not to sign me, the jinxed hero. Time came when producers, rather shamelessly, began dropping me out of their films. It started with AVM's Manmauji, where I was substituted with another hero.


B.R. Chopra was another one. Not only that, I was even expected to return the signing amounts. It hurt, but there was no other alternative. Finally in '65, a miracle happened. My film Jab Jab Phool Khile became a super hit. Everyone was surprised. As quickly as they had dismissed me off, I re-entered into circulation. Once again, I was being hounded by producers and the vicious circle of dates, signing amounts, phone-calls, which had stopped for a few months, started all over again.

As years passed, I got used to my career swinging like a pendulum. At times very good. At times verybad. My parents, who I often visited at their Matunga home, were ageing gracefully but like always, never complained of any discomfort. Whenever I met my father, he always said comforting things. "Filmline is a see-saw. It will sometimes go up, sometimes come down. What should never go down is your family life." I remembered that, and whenever my career nosedived, I took solace from these words.

In the year 1965, Karan Kapoor, our prince Charles, arrived early morning of January 18. Unlike Kunal Kapoor, who looked like a Glaxo baby, Karan was an unusually ugly baby. He looked like a rat and his grandparents didn't want to look at him, forget hold him. His mother didn't agree however. She cuddled her baby close and said, "my son is going to be a stunner and the world will see." I often ask Karan whatever happened to the great challenge his mother threw at us. "There is still hope," Karan laughs. "Maybe I'll turn into a stunner after I've turned 40." It's a family joke.

When I was 14, my friend, Prayag and I joked that we would one day become as important as Warner Bros. And we behaved like that — as equals. We told Raj Kapoor, "we can make a film too, if only we had a camera." So Raj Kapoor presented us with a Belltower Camera. Again, Prayag and I behaved like Warner Bros. We now decided that possessing a camera was not enough, we needed a set to shoot the film. So, like two professionals, we went to meet Raj Kapoor at his R.K. office, in Chembur. By now, I think, Raj Kapoor was fed up of us. He said, "take my set, take my lights, even my technicians, but only on a Sunday, for, if you don't mind, I want to do my shooting during the week?" Our film was titled Phaansi (1978) and we shot both indoors as well as outdoors. When I was in the shot, Prayag was the director and when Prayag was in the shot, I was the director. Chalk was used as cigarette, and plastic guns as pistols. It was a two-man-show, for the film was written, produced, directed, choreographed, photographed by us jointly. While outdoor shooting at Antop Hill, we used our servant as crowd. One servant was tied up with rope, a lifebuoy soap attached to his shirt, into which I was to pierce a real dagger. The servant who played this role died only a few years ago. I am glad he lived so long. I nearly killed him years ago, for while penetrating the dagger inside the lifebuoy soap, it went further and hurt the man.

In 1967, we were filming Pretty Polly, not knowing that our own Polly was on the way. On November 27, Sanjana, our third child, and first daughter was born. At last, the family was complete. This one time, Jennifer was admitted at the Breach Candy Hospital and this was also the first time when there were no tensions in bill payments. With three children, extra servants and my workload increasing, Jennifer felt we needed to shift into a bigger flat. Atlas Apartment. Today, Atlas Apartment has become more than a house. It is the dwelling place of too many memories. The blossoming of the house itself, our doing it up, each and every room was a phase. It's a house my kids grew up in... the house in which Jennifer fell ill and finally died...! Every corner of the house, every nail on the wall, has a story. The happy, the successful, the unsuccessful phases are all clearly marked.

One bad patch, I can never forget and which was rather difficult to cope with was when I didn't shoot for a whole year. Not a single day, can you believe it? I didn't have anything to do and I spent all my time reading books, playing with my kids, or simply irritating my wife. But most of the time, I hung around at James Ivory's office. I didn't meet producers, because wherever I went I was told, "you are finished." After a while, I began believing this. The going was tough and there were times when I had to sell a few things for my monthly expenses. Some well-wishers, at this stage, suggested that I wear a taaviz... or walk down to Haji Malang. What was really funny was at a time, when I didn't have a phooti kaudi in my pocket, and my career was supposed to be over, it was at this time that my new Mercedes, which I had booked earlier arrived. A Mercedes, those days was considered very ominous by the film industry. The car to bring good luck, the film folks unanimously believed, was only the Impala. "Impala kharido to sab theek ho jayega." I did no such thing. When I found my head bursting with negative thoughts, I went book shopping with Jennifer on the streets of Flora Fountain. After purchasing a pile of books, we ate dosas. If only life could be as simple.

This article was originally published in May 1991 as the first chapter of Junio G magazine's supplementary issue- Shahsi Kapoor: Once Upon A Time. The image used has been taken from the original article.